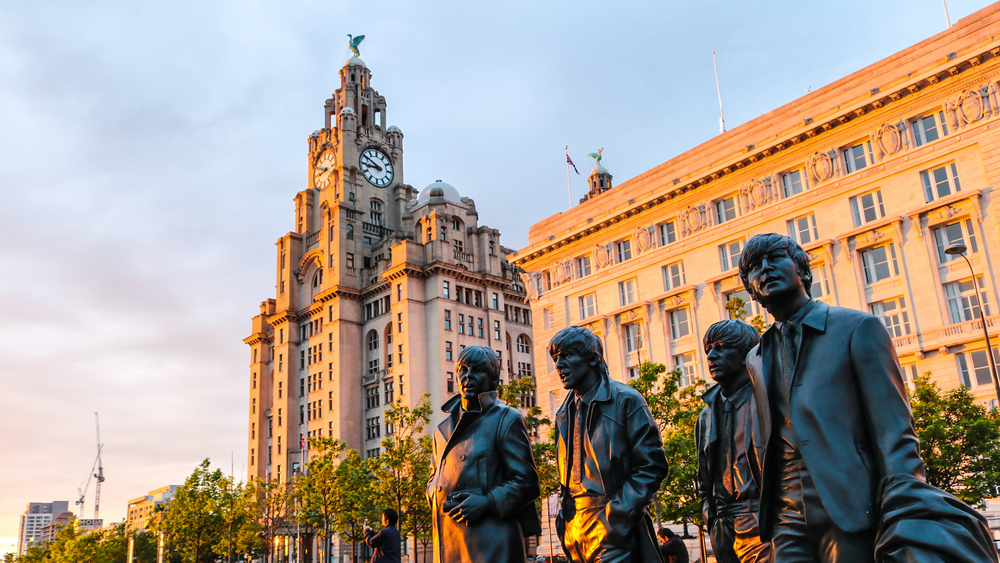 With its unique combination of skyscrapers, seafront, parkland, vibrant nightlife, and beautiful historical architecture, there’s an awful lot to love about Liverpool.

The former seaport is famous for many things: its friendly people, world-class football teams, distinctive local accent, famous musicians, epic warehouse parties, and much more, and many southerners tired of their gruelling commute and high living costs find that a happier life awaits them in this northwestern metropolis.

Liverpool shares all the attributes of any major European city, with its vibrant cosmopolitan culture and exceptional local amenities, while also retaining the benefits of its relatively smaller size. The centre is easily navigated on foot and the streets are full of life without ever feeling quite as congested as they do in bigger UK cities. The cost of living is also very attractive: residents in Liverpool earning £30k a year can enjoy a standard of living that would require a salary of £48,841.07 according to Numbeo’s Cost of Living Plus Rent Index.

If you’re thinking of making the move, here are just a few reasons why Liverpool is an excellent place to live.

It’s one of the most beautiful cities in Europe

Liverpool is criminally underrated in its standing among the most beautiful historic cities of Britain. Though it perhaps doesn’t spring to mind as quickly as Bath, York, Oxford, Cambridge, or Edinburgh, Liverpool absolutely deserves to be held in consideration alongside the most stunning cities in the country.

Liverpool is home to several stunning heritage sites (collectively known as Liverpool Maritime Mercantile City), located throughout its city centre. The list includes some of its most famous landmarks and impressive architecture, such as the Pier Head, the Royal Albert Dock, and the Ropewalks area.

Many of these spectacular locations are concentrated along the waterfront and feature in many of the most famous images of the city. The Three Graces dominate the iconic waterfront skyline, and you can spot the city’s mythical Liver birds sitting atop the dome of The Liver Building staring out across the river from most rooftops in the city centre.

Elsewhere, Liverpool has plenty of lush green space available to explore in any of its 43 parks, with the most idyllic being Sefton Park in the centre and Stanley Park to the north. Sefton Park is the largest park in the city, with 235 acres of parkland and the lovely Palm House, a grade-II listed Victorian Glasshouse and home to a botanical collection full of rare and exotic plants.

There are very places where you can enjoy the buzzing, cosmopolitan atmosphere of a major city AND stunning beaches within easy reach of the city centre. A short 15 minute journey from the city centre (via Merseyrail) will take you to Crosby Beach, where you’ll find Anthony Gormley’s iron sculptures dotted across the sand.

The art installation, ‘Another Place’, is a series of 100 cast iron sculptures facing out to sea, and all the figures are modelled on the artist’s own body. The iron men are variously revealed and submerged throughout the day as the tide ebbs and flows, and this enormously popular piece of public art has been intriguing, amusing, and sometimes deeply moving, locals and visitors alike since its installation.

Slightly further afield is Formby Beach, an expansive stretch of sand dunes that remains surprisingly unspoiled for somewhere so close to both Liverpool and Southport. It’s a great place to go for a swim or sit making sandcastles, and the coastal pines that border the dunes are home to an enormous red squirrel reserve. It’s well worth a visit if you want to catch sight of some of Britain’s rarer wildlife.

It’s at the cutting edge of modern art and culture

Liverpool is the go-to destination for contemporary art in the North. It’s a city with culture around every corner, with art, photography, sculpture, and theatre all very well-served by the many galleries, playhouses, and exhibitions across the centre and beyond.

The waterfront in particular is home to several incredible galleries, such as the Tate Liverpool and Open Eye Gallery, offer visitors the chance to explore internationally acclaimed exhibitions throughout the year, with both permanent and visiting collections to marvel at for fans of modern art and photography.

Across the city, FACT is a groundbreaking digital art exhibition space that explores the intersection of art and technology across two galleries, three cinemas, a media and exhibition space, plus a lab for learning and experimentation. There’s always something new and thought-provoking to explore at this creative technology institution, with work created by both emerging talents and some of Britain’s most established digital artists.

It’s not just the visual arts that have found a welcoming home in Liverpool - there are also dozens of theatres across the city showing a range of critically acclaimed comedy, drama, and musical productions. There’s the RIBA awarding-winning The Everyman, The Playhouse, Royal Court and Empire, mostly located in and around St George’s Quarter.

Liverpool’s many diverse cultural offerings are frequently brought together and drawn out of the gallery and into the city in the many festivals that take place throughout the year. Highlights include the Liverpool Biennial contemporary arts festival and Homotopia - the UK's longest running LGBTQIA+ arts and culture festival.

Liverpool is world famous for its musical heritage. Though John, Paul, George, and Ringo are undoubtedly its most famous sons, other iconic acts the city has also given us include Echo & The Bunnymen, Flock of Seagulls, Dead or Alive, The La’s, Frankie Goes to Hollywood and, for those of us who grew up in the 90s, Atomic Kitten and Mel C (objectively the best Spice Girl).

The city continues to nurture its homegrown talent and host the world’s biggest stars at venues across the city, including the iconic Cavern Club, Arts Club, Hangar 34, the O2 Academy, Echo Arena, and the Royal Philharmonic. There are also several different music festivals that take place throughout the year, including LIMF and Sound City - an event that sees up and coming talent take over bars and venues across the city from the Bombed Out Church to the Cavern Club and everywhere in between.

As well as stellar live music, you can always find a cracking party in Liverpool. The travel publisher Rough Guides placed ‘a night out in Liverpool’ at number on its global bucket list, ahead of visits to global landmarks including the Great Wall of China and the Taj Mahal. One of the more distinctive features of Liverpool nightlife is the sheer number of industrial warehouses that have been repurposed into truly unique and exciting events spaces for both one-off raves and regular club nights.

Whether you’re looking to drink, dine, or shop, there is plenty to eat, drink and purchase that you won’t be able to find anywhere other than in Liverpool.

Take a trip to the Baltic Triangle or the Ropewalks area in the city centre and you’ll find plenty of independent shops, bars and restaurants where you can experience something totally unique to the city. For plenty to explore all under one roof, check out Baltic Market and Duke Street Market.

One of our Liverpool locations is Camp and Furnace, a large former warehouse in the Baltic Triangle that now functions as a restaurant, bar, indoor festival site, pop-up events and conference space, and neighbourhood cultural hub. Voted the ‘second coolest restaurant’ in the UK in The Times, Camp and Furnace offers a dining experience unlike anywhere else you have visited before.

Their Sunday roasts are the stuff of legend, with whole uncarved joints of your favourite meat are served up with Yorkshire puddings, roasties, and all the trimmings along with the cutlery you need to serve yourself and your friends.

If you’re looking to find a new home in Liverpool, we have a range of outstanding modern apartments available in The Copper House. Located adjacent to the Royal Albert Docks, right in the heart of the city, this development includes a range of contemporary 1, 2, and 3 bedroom apartments and exclusive resident-only facilities, including a roof terrace and BBQ area that overlooks the beautiful waterfront. All apartments are professionally managed, fully furnished, and pet friendly.

Visit our property page now to see more and book in a viewing.