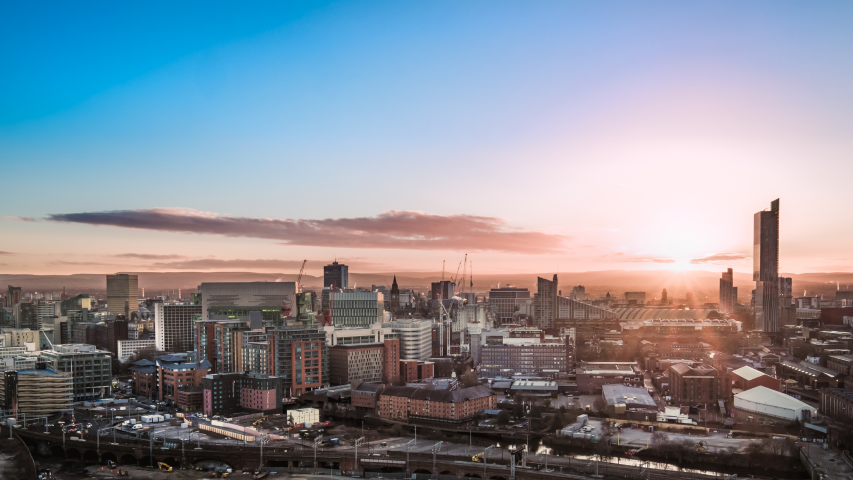 Manchester consistently ranks as the most liveable city in the UK according to The Global Liveability Survey, well ahead of any other major British city (sorry, London). But what makes Manchester so great?

There’s no disputing the fact that Manchester has made many essential contributions to global culture. This is the city whose diverse achievements include canals, the railway, British dance music (and more great bands than we can count), modern computer science, Coronation Street, vegetarianism, the football league, City and United, Vimto, Anthony Burgess, the world’s first English language library, Baracuta Harrington Jackets and, unfortunately, Take That.

Today, Manchester is a modern cosmopolitan city with a thriving local culture and all the amenities you would expect from a major metropolis. It has one of the highest graduate retention rates in the country, with 51.5% of students loving Manchester so much they opt to remain in the city after finishing their studies.

In the article below, we explore six reasons why Manchester is a great place to live!

It has some of the most exciting bars and restaurants in the country!

When it comes to the variety and quality of bars and restaurants in Manchester, the city can stand toe to toe with any other major European city traditionally celebrated by foodies the world over. Between 2014 to 2019, Manchester bucked the national trend towards increasing numbers of restaurant closures and was the only city in the UK to experience growth in the sector, with 232 drinking and dining establishments operating in June 2019 compared with 183 in June 2014.

The city offers an embarrassment of riches across the culinary spectrum, with just about every national cuisine well represented whether you’re looking for cheap eats or fancy treats.

Restaurants Mana (Manchester’s first Michelin-starred restaurant since 1977), Adam Reid at The French, and Where the Light Gets In (located in the nearby satellite town of Stockport) all offer innovative menus curated by some of the best chefs in the country.

If it’s casual dining you’re after, try a ridiculously indulgent burger at Almost Famous, share a serving of crispy fried chicken at Yard & Coop, or load up on Japanese small plates at Yuzu. Whatever you’re in the mood for, there are a range of options to suit every taste and budget in the city centre and beyond!

Mancunians also pull an excellent pint. The city has a booming craft beer scene, with dozens of microbreweries including the ever-popular Blackjack, Brightside, The Epicurean, and Marble all based in and around the city. It doesn’t matter where you are in Manchester, you’re only ever 5 minute walk in any direction away from one of the best watering holes you’ll likely ever visit.

The cost of living is reasonable

It goes without saying that life up north is far easier on the wallet than it is down south, but let’s look at some figures to explore just how much you can save. According to Numbeo, the average rent on a central city property in Manchester is an astonishing 53.49% cheaper than a comparable property in central London. The daily commute is also significantly cheaper in Manchester: a monthly Metrolink pass for the city’s two central zones costing £60.20, whereas a travelcard for zones 1-2 in London will set you back £140.10. That makes the monthly cost of commuting in Manchester 57% cheaper than in London.

While it’s true that the average salary in London is higher than in Manchester, according to Numbeo’s indices you would need to earn £43,918.57 a year in London to maintain the same standard of living you could achieve on an annual salary of £30,000 in Manchester.

It has a legendary music scene

The Smiths, Joy Division and New Order, Oasis, The Chemical Brothers, The Stone Roses etc… Manchester has spawned some of Britain’s most iconic bands. As you would expect from a city with such a fine pedigree, Manchester is one of the best places for live music anywhere in the world.

The Manchester Arena has the highest indoor seating capacity in the country (and the second highest in Europe) and hosts some of the biggest acts in the world, while the Albert Hall and O2 Apollo also welcome many popular names making the obligatory tour stop in Manchester.

Elsewhere in the city, there are plenty of smaller venues carrying the torch for new and independent music. In the tradition of Factory Records and the Haçienda, famous for their role in the legendary local Madchester scene and the emergence of rave culture, places such as Gullivers, Soup Kitchen, and Night & Day Café continue to provide a platform to launch their career. Clustered mainly in the city’s hip Northern Quarter, you can catch a show at any of the above and discover a new favourite band every night of the week.

It’s the sporting capital of the UK

Home to two of the best football teams in the world, Manchester is a mecca for fans of the beautiful game. Before settling in for a match at Old Trafford or the Ethiad, football nerds can learn more about the history of the sport at the National Football Museum. Items in its extensive collection include the very first football rule book, one of the original FA Cup trophies, and player kits from some of the most memorable games in football history (including shirts worn by players during the 1966 World Cup final).

However, it’s not only football that makes Manchester a great destination for sports fans and athletes (amateur or otherwise). The legacy of the 2002 Commonwealth Games left the city with a range of outstanding sports facilities that were subsequently opened for public use. Amenities include the Manchester Aquatics Centre, Manchester Velodrome, and the Regional Athletics Arena. The city also boasts a renowned test cricket ground in the Emirates Old Trafford stadium, one of the five host venues during the Ashes series.

The arts and culture are thriving

Theatre, cinema, art, comedy, live music (see above), dance... It’s all flourishing in Manchester. The city is an international go-to destination for the arts, with the impressive multi-purpose venues HOME and The Lowry both rivalling London’s Southbank Centre with the quality of their diverse annual programmes of theatre, dance, music, exhibitions, and much more.

The city is also home to an eclectic range of award-winning museums and art galleries, including the People’s History Museum, Manchester Art Gallery, and the Imperial War Museum North.

Our favourite is the Whitworth, an art gallery and recipient of the prestigious Museum of the Year award for demonstrating excellence, innovation, and imagination in its exhibitions. Founded in 1889 as the first English gallery built in a park, the gallery is part of the University of Manchester and displays a range of collections covering both historic and contemporary art across a range of mediums.

Following a recent £15-million face lift, the Whitworth is now an awe-inspiring complex that has fully integrated its indoor galleries with its outdoor park, creating a truly unique space for visitors to engage with art and nature.

Many cities have struggled to reap the benefits of investment and redevelopment without losing some of their local charm and character in the process. Manchester has triumphed where many others have failed, with the modern glass and steel of rapidly regenerating neighbourhoods such as Salford Quays blending seamlessly with the red bricks, towering mills, meandering canals, and imposing viaducts of its industrial past.

A visit to Castlefield is the perfect place to enjoy the best distinctively Mancunian scenery from both past and present. You can enjoy a quiet canalside stroll alongside its lovingly restored Victorian terraces while admiring the city skyline in the distance.

Elsewhere, neighbourhoods such as the Northern Quarter, Chorlton, and the Gay Village could only exist in Manchester. Though they offer all the amenities of any modern city centre district, you can find famous local institutions like the psychedelic Affleck’s Emporium and Piccadilly Records representing Manchester’s local culture and sense of fun.

If you love the sound of Manchester and are looking to make the move, we have a range of fantastic, professionally managed modern apartments available to rent now. Located in developments based in some of the most up-and-coming areas in Greater Manchester, you can view all of our local property listings here.