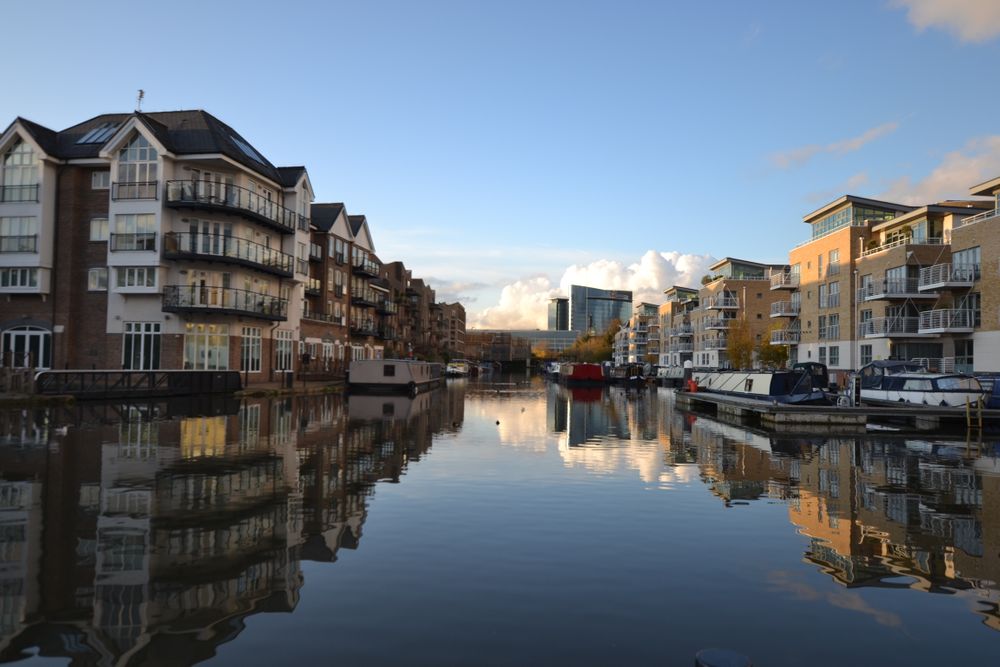 The town Brentford is a suburban enclave in West London surrounded by neighbouring Chiswick, Ealing, Richmond and Kew, and situated within view of the River Thames. With its abundance of wide open, natural spaces, network of meandering waterways, and quaint village aesthetic, Brentford might not immediately strike visitors as the most obvious base of operations for international titans of industry.

However, Brentford hosts the UK headquarters of several of the largest companies in the world, with GSK, Sega, Sky, Vodaphone, Mitsubishi, and Sony (to name but a few) all located locally. The town’s diverse, thriving economy has prompted significant investment in the local community and its infrastructure, transforming Brentford into one of the most exciting up-and-coming areas to live in Greater London.

Though Brentford looks intently towards the future, it is also steeped in fascinating local history. It’s a town whose urban geography is defined by its Victorian industrial canal network, and echoes of the past can be observed everywhere by those exploring the canal side. Perhaps the most interesting piece of Brentford trivia can be found in the fact that Pocahontas (born Matoaka) and her family called the town home during the final year of her life in 1617. Her time in Brentford is commemorated with a plaque located in Syon House, close to her former residence.

Central to Brentford’s success as a commercial powerhouse is its proximity to excellent transport links connecting it to both Central London and the wider world.

Brentford is a 15-minute drive away from Heathrow Airport, where flights depart to over 180 destinations in 90 countries. Heathrow can also be reached via a short tube journey from Boston Manor Park Underground Station.

Brentford is connected to the underground network by Boston Manor Park Underground Station, which is served by the Piccadilly line. A journey to Leicester Square or Picadilly Circus takes roughly half an hour on the tube, and The City can be reached within 40 minutes. For those who work/play a little closer to home, South Kensington station is a mere 20 minutes away.

Brentford Station connects the town to South, Central, and East London, allowing locals to benefit from a straightforward morning commute. Passengers travelling into the city can arrive at Clapham Junction with 12 minutes, Waterloo within 25 minutes, and Bank within 40 minutes.

Brentford is served by the E8, the 195, and the E2. Ealing Broadway can be reached via bus in 45 minutes, and the University of West London, the University Hospital, Chiswick Business Park, and Twickenham Stadium are all only a short bus journey away.

As Brentford is both a leafy waterside suburb and a vibrant commercial hub, located outside the tumult of central London while remaining well connected to the city and wider world, it offers residents the unique opportunity to enjoy both rural tranquility and urban excitement. Below are some of our recommendations if you want to experience the best of Brentford.

Hen Corner is an adorable micro-bakery and cookery school that aims to help residents of Brentford ‘turn their urban corner green.’ The micro-bakery bakes 30-40 loaves of bread and hundreds of sweet and savoury sweets every Friday for their loyal base of customers, with all items made to order and produced exclusively with local produce. Bakes are available for collection directly from their smallholding every Friday between 5:00 – 7:00pm, so be sure to make a note in your diary and place your order ahead of time to gather all the ingredients you need for the perfect weekend brunch.

When it comes to Indian cuisine, Albany Spice leads the field in Brentford by a country mile and is a strong contender for best curry in West London. This Balti House is a Brentford institution popular with locals for its reasonably priced menu, exceptional food, and BYOB (no corkage fee!) policy. A curry with rice, naan, and starter will set you back no more than £15, and you’re free to wash it all down with your own tipple of choice (be it corner shop lagers or top shelf spirits).

Brentford’s newest pub has revamped the classic British pub menu to create an innovative new eatery offering both old favourites and spectacular fusion dishes. We recommend the Steamed Mussels (a perfect way to conclude an afternoon ambling along Brentford’s waterways) or the Southern Thai Green Goat Curry if you’re feeling adventurous. As you might expect, the pub has an extensive tap line and selection of local and international bottled beers and ciders, with something on offer to impress even the most discerning beer nerd.

One of London’s last great houses, the Grade I listed Syon House is a spectacular feat of Tudor architecture. Family home to the Duke of Northumberland for over 400 years, the house and gardens are now a heritage site open to the public. In addition to the main house, the Great Conservatory is a botanical paradise that is, in modern parlance, ‘highly instagrammable.’ For the perfect end to your journey back in time, conclude your trip with a picnic in Syon’s 40 acres of picturesque gardens.

This quirky collection tops several lists of ‘London’s Top Hidden Gems’ and has been awarded the Trip Advisor Certificate of Excellence. The museum charts the evolving story of how we have recorded and listened to music over the past 400 years and boasts a remarkable collection of instruments and contraptions, including ‘reproducing pianos, orchestrions, self-playing violins, pipe organs, gramophones & synthesizers.’ To experience the museum’s lovingly curated exhibitions at their best, take a tour and witness one of the institution’s guides conduct a live demonstration of its most weird and wonderful artefacts.

Located at the confluence of the River Brent and the River Thames, Brentford was once a crucial industrial node where goods and raw materials were transported into the city via its canal network. No longer a bustling trading port, Brentford Lock is now the perfect place for a walk or cycle on a sunny day. Walk from Brentford to Old Deer Park and Observatory via the Grand Union Canal, Syon Park, Richmond Lock, and several waterside pubs and cafés in between.

Is Brentford for you?

Brentford is the perfect place to relocate if you’re a working professional who craves the pastoral comforts of country living without sacrificing the excitement and convenience of the City. As businesses from all over the world continue to set up nearby, Brentford is set to benefit from significant investment in housing, infrastructure, and the local community.

Reach out to us today to book yourself a viewing at the stunning Vonder Village, a newly refurbished apartment block finished to the highest specification, and set yourself up in a small town with a big future!